Flesh deals with the commodification of the body. At the intersection where biology and emotion, religion and politics, morals and marketing, love, lust and the law, the public and the very private all intermingle, intimacy is flaunted, hawked and contested.

Stripping themselves of inhibition, four performers offer themselves up for your delectation, and all for the price of a ticket. There’s 80 minutes on the clock and the meter’s running.

Flesh was commissioned by Frantic Assembly, and premiered in 1996. The show drew on the audience-performer relationship to explore the body and intimacy as merchandise, in a consumer society that has lost its innocence. Choreography came courtesy of Christine Devaney of VTOL Dance Company. The production toured internationally through 1998. 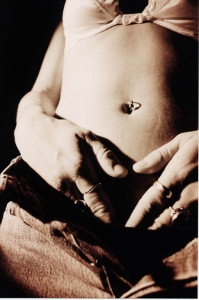 Performers over the various tours 96-98:

A second production was produced by 2021 Performance at the Tarragon Theatre in Toronto in 2001, and featured Susan Doyon, Adam Gaudreau, Spencer Hazel and Diane Niec.

Review in The Guardian

Review in The Independent

Review in The Herald 1

Review in The Herald 2