Full Moon was an installation artwork that featured in the 1998 Belfast Fringe Festival. 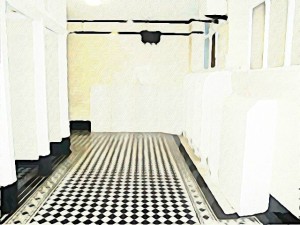 The most public of private spaces. The most private of public spaces.

Full Moon was shortlisted for the Visual Arts Trophy in the 1999 Belfast Arts Awards.

The installation also featured on a number of media channels, including items and interviews on CNN, RTE and the BBC World Service. The piece was produced in collaboration with Caoimhe McAvinchey, and featured a cubicle performance by Phil Collins.

I was subsequently invited by Wales Arts International/British Council to stage the work in New York in 2001, as part of a larger festival of British work (UK in NY). I spent time in the city scouting for suitable spaces (including the toilets on the ground floor of the World Trade Center). However, following the 9/11 attacks, the festival was scaled back, and the project was withdrawn.