“evocative… really inspired writing… very clever use of recorded sound, monologues and physical and verbal parodies of typical experience, a huge amount of ground is covered with wit and verve… an excellent piece of theatre” The Scotsman

Performers over the various tours 95-98:

KLUB offered an exploration of the phenomenon of UK contemporary club culture, which exploded into public consciousness during the early years of the 1990s. Written off by many as mindless, superficial hedonism, the movement had remained relatively unexamined in any serious way.

The show sought to explicate what it was about the club/rave experience that was essential to that cultural moment in time, and to all those hundreds of thousands who were involved in participating in it on a weekly basis. It aimed to provide a counter-narrative to popular establishment discourses that rejected its validity as a social phenomenon.

Interestingly, club culture was being discussed broadly not only as “evil”, but also as amoral, mindless, apolitical, without any merit, at best just a decadent, hedonistic outpouring, the worst excesses of youth culture (or yoof, to add that infamous sarcastic twist). 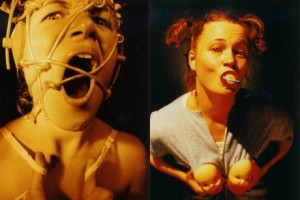 KLUB countered that the entire phenomenon was very much rooted in its time; that the act of entering a noisy, dark, communal space with scores of others, acquaintances and strangers alike, was both valid, political and desperately needed in the wake of a decade where identity had on the one hand been a battlefield (with gender, queer politics, and ethnic identity being thoroughly contested on the Left), and on the other where individual identity had been championed on the Right.

“goes for the adrenaline surge, buzzes with contemporary relevance, but it has intelligence and heart and humour too.” The Herald

In the early 1990s, in dance clubs, warehouses and outdoor settings across the country, people gathered to spend some time outside of those identity discourses, with people of whom they neither knew – nor cared – whether they were straight, gay, a lawyer, a carpenter, feminist, communist, rich man, poor man, beggar man or thief. 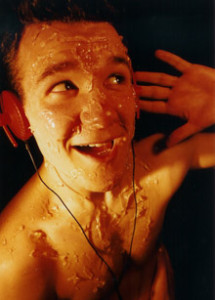 The subversive challenge to the establishment was not that of taking illegal substances such as Ecstasy and speed: these were the drugs of choice because they heightened the very sense of communality with others, and it was this that was a radical departure from the previous decade, and of the discourses that this generation had lived through.

..is not theatre for the faint-hearted.. a ferocious display of energy.. the ingredients of mime, stand-up, dance and dialogue whipped up into an exhilarating spectacle.. portrayed with astonishing verve and humour.. terrifically enjoyable theatre that really engages with an audience. TimeOut

KLUB was furthermore an attempt to articulate in a theatrical medium both the politics of the clubbing generation, and finding in the form itself a means to represent the clubbing experience of this community.

Review in The Herald August 1995

Review in The Herald October 1996