Pick of the Week

AFTER a successful run at the Greenwich Festival in London with a revival of Irvine Welsh’s play Headstate, an examination of the highs and lows of what the author calls “the chemical j generation”, Boilerhouse returns home to the Edinburgh Fringe with a new play from the same cast.

Like Headstate, there will be a lot of swearie-words and hyperactive running around in Seizer, but the metal gurneys that were used to wheel the cast at bone-breaking speed through the audience are being replaced by a motorised chariot, kitted out with DJ decks and searchlights. At the wheel will be Steven Berkoff disciple and club convert, Tarn Dean Burn, who plays DJ Seizer in a show which equates the gladatorial combat of the Roman empire with the ritual humiliation of guests on Oprah Winfrey-style confessional television. 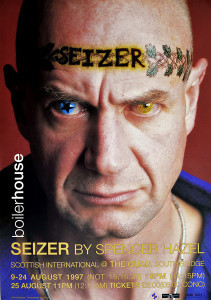 The outdoor of Edinburgh’s Old College, a classical terraced quadrangle with plenty of space to wheel-spin a chariot, provides the perfect amphitheatre, which has been used for occasional Fringe shows in the past, including a memorable Japanese version of Macbeth.

As with Headstate, exploitation remains a theme, but instead of party drugs providing the main storyline, Seizer is about the way raw emotion is turned into entertainment TV, as drama is replaced with the fly-on-the-wall documentary.

“The novelty of these programmes is going to wear out so the demand is going to be to get more real, to see more of the gore until you see actual deaths,” says Burn.

Music is key element of this production, with each scene referred to as a “track” that has been “remixed” as part of the company’s devising process, in which Spencer Hazel’s script provided a starting point for adaptation and improvisation.

The soundtrack includes music ranging from Underworld to Elvis Presley’s Heartbreak Hotel. Boilerhouse seems to be asking whether pop culture is in danger of eating itself. Expect energy and spectacle, if not necessarily coherent narrative.